You are here: Home » About The Project

ScienceToGo.org is a collaboration led by UMass Lowell that includes the MBTA, UMass Boston, Texas State University, the National Science Foundation, and the Museum of Science.

Education can happen in unexpected places, especially with the growing prevalence of smartphones. So for 14 months spanning across parts of 2013 and 2014, we explored new ways to share science with the public using “out of home media” by combining posters and placards on the T (Boston’s public transit system) with online resources, social media, and physical exhibits and events around the city. In designing our out-of-home media products, we chose to focus on climate change, one of the most important and challenging issues of our time.

The project consisted of an educational campaign and research about it. As educators, our goals were to interest people in climate change, represent clearly and accurately what science has revealed, and help us all think for ourselves. We cared about providing the best information science can offer, but we also recognized that science alone does not answer every question decision-makers must consider, especially when the choices involve trade-offs. As researchers, we aimed to learn about the potential of out-of-home multimedia to foster science learning. We hope you learn from and enjoy our project.

Posters and Placards on Boston’s T 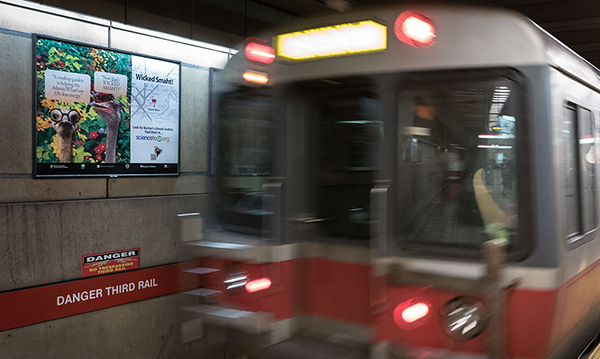 The most visible component of the ScienceToGo.org initiative was the signage: 12 sets of posters and placards that appeared in stations and on trains of Boston’s transit system’s Red and Orange Lines. The systems’s other two lines did not have signage, allowing us to compare conditions with and without these promotional efforts. 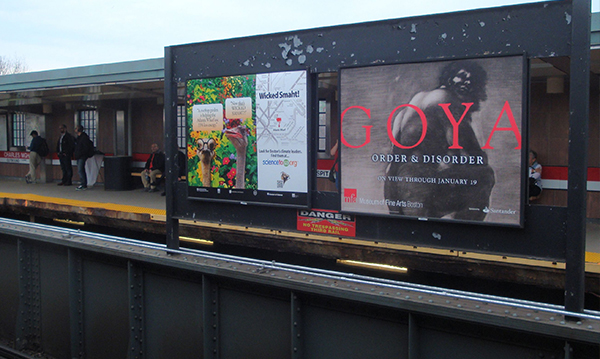 Over the course of 14 months, we told a story about science via three phases of posters and placards appearing almost every month. During the first phase, our signage was devoted to “reality,” showing that scientists, based on the evidence, have reached a very strong consensus on the fundamental causes of climate change. The next phase was devoted to “relevance,” emphasizing that climate change is affecting all of us here in Boston. The initiative ended with a final phase devoted to “hope,” by sharing meaningful local efforts that mitigate and respond to climate change. While highlighting the actions of specific leaders in Boston, the signage also conveyed the idea that we can all be climate heroes by taking positive steps together.

The T signage introduced the character of Ozzie the Ostrich. Using an ostrich as our spokes-character we played off the common misconception that ostriches bury their heads in the sand to avoid danger, which we felt was an interesting metaphor for how some people respond to climate change. Ozzie’s look was goofy and entertaining. His curiosity, combined with skepticism, felt natural and welcoming. Ozzie was able to explore, learn and ask questions about climate change in ways that were not too academic and to which everyone could relate. Our team had fun with him, particularly in the second phase when the posters played with the “New Normal” meme. Our goal was for T-riders to enjoy Ozzie and to engage in learning with him.

The signage on the T served as the starting point for most of our audience. From there, riders were invited to continue their free-choice exploration of the topic through this website, a text messaging system, and two social media sites. All signage included the ScienceToGo.org website address. We updated the website regularly to keep pace with the campaign’s changing themes. The site included a playful interactive app called “PaparOzzie” that let users take a selfies or other photos, add images of Ozzie and his friends, and share them via social media and email. Other interactive parts of the website included a clickable image of the Boston skyline showing local impacts of climate change, and a form for submitting questions to the project’s scientists. Over time, and as Ozzie’s story developed, the website’s slideshow grew cumulatively, as well; so at all times, the website conveyed the current idea as well as the story leading up to it.

The text messaging system was a fast and simple method for audience participation. Each month’s signs posed a provocative question and instructed viewers to send a text message to request a return text with the answer. For example, in February 2014 the signage asked, “But how can something called ‘global warming’ cause more storms in winter?!” Viewers who texted “snow” to 77948 received a text message back saying, “Frigid arctic air is kept over the North Pole by winds called the polar vortex. As the North Pole warms, this barrier weakens allowing cold air to come down to Boston.” The count of text messages was a straightforward measurement of engagement with the campaign.

Social media posts on Facebook and Twitter echoed the themes of the signage and website while adding daily news updates, photos, videos, and opportunities for users to join the conversation. People found out about social media through links on the ScienceToGo.org website, word of mouth and sharing, and through information printed on physical exhibits and paper flyers distributed during public events around Boston.

Knowing that Facebook and Twitter audiences differ slightly in their demographics, we adopted different styles and tones for the two sites. Ozzie’s posts on Twitter (@BostonOstrich) were quick and peppy, worded as if spoken by the ostrich himself. Facebook posts were also pithy and generally upbeat, but tended to include more science explanation. Based on numbers of likes, shares, and retweets, we saw that posts with whimsical images or videos had the greatest reach. We posted many photos of plush toy ostriches, bespectacled like Ozzie, in amusing locations and situations related to Boston and climate change. We invited people to take their pictures with Ozzie and asked them what actions they are taking to reduce their emissions and live more sustainably. We referred to these people as “climate heroes” and posted their answers along with their photos. We also produced original media including short videos and a set of imitation baseball cards featuring climate leaders of Boston.

This combination of web resources and social media supplemented the T signage to create a dynamic educational experience in both physical and digital realms. 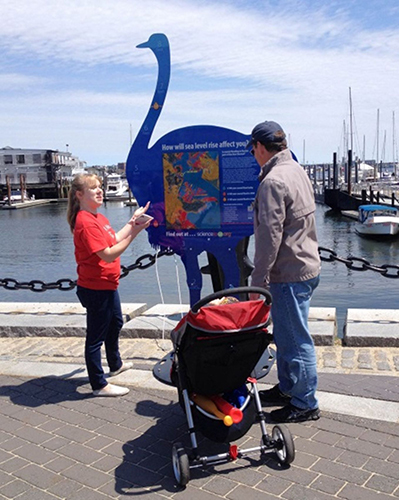 Working with local government and business partners, we erected temporary educational art installations throughout Boston on three occasions. The installations were colorful ostrich-shaped sheet metal displays, each a silhouette of an ostrich displaying visuals, some text, and, in cases, links to audio recordings related to the display’s location. The audio files were conversations between “Ozzie” and an expert. Just as in the T signage and online content, Ozzie represented all of us. He sounded curious or confused when asking questions, and was interested in and sometimes surprised by the answers.

The first set of ostrich silhouettes were displayed at a two-day kick-off event in October 2013. ScienceToGo.org team members greeted pedestrians as they walked by and asked them to place a sticker on an ostrich that represented their response to the following question: “Based on the evidence, ___ % of climate scientists have concluded that human-caused climate change is happening.”

The second set of ostrich silhouettes were installed in May 2014 and bore the headline, “How will sea level rise affect you?” Each one answered the question in the context of its specific location, highlighting the spot on a map of projected sea level and discussing the increased risks of flooding and storm surge.

The third set, displayed in October 2014, celebrated Boston’s climate leaders. Each ostrich was positioned next to an example of an action a local organization had taken to mitigate the impacts of climate change, such as the Lenox Hotel’s electric car charging station, the forested string of public parks known as the Emerald Necklace, and Boston Harbor Islands Welcome Center’s roof with solar panels. The location-specific content made the connection with climate change concrete and immediate.

We organized free public events around the installation of the educational ostrich-shaped displays . The events generally took place in public parks and featured short talks by local experts and leaders, informal conversations, and fun photo ops. One event occurred on Halloween and was especially festive, with costumes and candy.

The primary goal of the research was to assess the strengths and weaknesses of our multi-media learning campaign. The two subway lines featuring our signage serve over 400,000 riders daily, a diverse population in terms of socioeconomic background, education, ethnicity, and lifestyle. We wondered whether this broad audience would notice our campaign. Would people read the posters, use the text-messaging, view and return to the website? To what extent would they be engaged? For us, the project was new educational territory, and thus a good opportunity to see whether our approach could be at all effective.

We surveyed T-riders several times to assess awareness of the campaign as well as any changes in knowledge and attitudes related to climate change (for example, about its consequences and personal relevance) that might be attributed, at least to some extent, to the campaign’s messaging. We hoped that surveying riders on two subway lines with signage and two without would provide a comparison between people with varying degrees of exposure to the campaign. The text-messaging provided a direct measure of engagement. Use of the website and social-media were also indicators of engagement.

Preliminary results suggest that the public noticed and liked the posters and placards. The ostriches proved to memorable and widely appealing. Humor seemed to be an important component for engaging riders, although the text messaging was driven by curiosity about the specific questions we asked. While some riders did visit the website, the transition from signage to online media was a challenge for the project. We did observe some movement in riders’ attitudes about climate change over time; we are in the process of sifting through the results to determine the extent to which our work may be responsible for observed changes.

Visit us again or sign-up for email updates about research results, publications, and conference presentations about ScienceToGo.org!

ScienceToGo.org is funded by a grant from the National Science Foundation.